There’s a reason I don’t drink alcohol.
Anyone who can eat an entire bag of Trolli sour gummy worms against their better judgement on the car ride home from the grocery store, has a serious problem with self-control or an addiction to sugar or maybe both.
And I’m not talking about an isolated incident once upon a time.
My blood sugars spiked just last night as I polished off the gummy worms about 6 hours before my 2 am freezer raid which emptied a pint sized container of Graeter’s ice cream right down into my tum-tum.

I wonder how many hundreds, no, thousands of times I’ve driven to the store not sure what I’d buy but intent on securing a sugar fix.

Way back when I was a girl, I’d lift change off my parent’s nightstand and ride my bike to the drug store for a Butterfingers candy bar. In my teens, it was cinnamon pinwheels and ice cream sandwiches consumed in mass quantities instead. Then I went to college where buffet style dining offered me any combination of ice cream, cookies and brownies at every meal with a nice cold pop to wash it all down with.

As I’ve matured, my tastes have become more sophisticated, and with the exception of sour gummy worms and Skittles, it’d be fair to call me a sweets snob now. I snub what I don’t want, but if I’m craving it, I dare you to stop me from eating it. 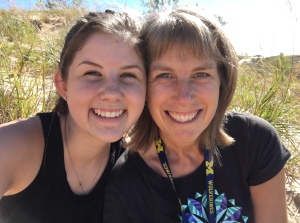 Robyn, she tries. God bless her.
“Mommers, you said you weren’t going to eat any sweets this week.”
“Remember your diet. You’ve made really good progress. Don’t blow it now.”
“Think about your pants, mommy. You hate it when they feel tight. Don’t eat that. You’ll regret it.”
And then when she’s fed up, she changes tactics.
“OK, go ahead and eat it then. I don’t care if your stomach pooches. Just don’t blame me when you get on the scale. I tried to help you and you NEVER listen to me.”

Sometimes, my conscience gets the better of me and I ask my hubs or one of the kids to hide the Dove chocolate caramels or the Lindor truffles. Then, later, I whine and offer a lame explanation about why I deserve to get them back and make pie crust promises about parceling out the remaining pieces in the bag. But generally, I get caught red handed eating something I’ve said I shouldn’t or wouldn’t instead and end up feeling like a 3 year old with her hand in the cookie jar. Ashamed.

By God’s grace, I don’t have diabetes yet but I do have a dentist appointment on Wednesday to get a cavity filled and I’ve been warned that it’s so deep it might require a root canal. If it does, well, that’s my bad. As the only adage says, “You reap what you sow.”

Anyone who’s an addict or lived up close and personal with one will resonate with my little vignettes, and when I take a long and thoughtful look in the mirror, it’s like I see flashing yellow lights on the periphery of my image warning me of my vulnerability to other potentially addictive habits as well. Like alcoholism.

It just so happens that I’ve got a long list of generational garbage resulting from alcohol abuse. And it stinks. Men who got mean and angry under the influence. Marriages broken under its bondage. Vocations sabotaged. Health compromised. Pre-mature death.
And honestly, it’s not just my kin. Everywhere I look there’s carnage from the misuse of alcohol. Innocent lives cut short by intoxicated drivers. Promising futures traded for jail time. Financial resources squandered at the liquor store. Violence. Rape. Neglect. Abuse.

While I hang in crowds where people generally drink responsibly, at least publicly, enjoying a glass of wine with dinner or the communal experience of a shared craft beer at a brewery, I know a long list of people, including Christians, who have remorsefully shared their private struggle to control alcohol consumption. For them, a stroll down the liquor aisle at the grocery store feels a lot like my own experience surveying the fine chocolate a few rows away.

From my vantage point, the Bible is the authoritative instruction book on life’s lessons for dummies and I don’t believe that it teaches that consuming alcoholic beverages is sin; however, all addictions are sin, evidence of our brokenness manifested uniquely in our person and through our story.

Some addictions have a higher cost ratio than others though. My sweets addiction, it costs me in dental work and blood sugar spikes. And it costs my family some living expense money but, unlike alcohol, nobody is at risk of me hauling off and slugging them because of its influence, or passing out incapacitated unable to meet my obligations. I don’t jeopardize the safety of other image bearers driving on the roads. And it doesn’t take away my sensibilities or inhibitions. Eating sugar is not destroying my family.

Whatever we’re getting our short-term fix from though leaves us longer-term shamed because addiction’s a hungry monster, never satisfied, always wanting more. And so we do battle inside, good against evil. And every fresh, new morning, we have to choose whether or not we’ll feed or starve the monster. Addictions are multifaceted and complex, sometimes linked to genetic wiring or chemical imbalances. And our habits bore superhighways along the neural pathways in the brain. Nevertheless, we are not left powerless against addictions. We make choices and when we interrupt the pattern of addiction repeatedly, we form new neural pathways according to God’s amazing design. And every fresh, new morning, His mercies are enough to empower us to resist our addictions and abundant enough to lavish us with unconditional love even when we fail.

So for me, it just feels like a no brainer. Alcohol and I, we’re not right for each other. And this holiday season, I’m pulling out my plastic wine glasses from the Dollar Store and stocking up on my sparkling grape juices in all of the specialty varieties at $2.98 a bottle. And you can just call me Little Miss Teetotaler, thank you very much.

© Hope Webster, hopewebster.com and 40+ Musings, 50+ Musings 2014-2017. Unauthorized use and/or duplication of this material without express and written permission from this site’s author and/or owner is strictly prohibited. Excerpts and links may be used, provided that full and clear credit is given to Hope Webster and hopewebster@com, 40+ Musings, 50+ Musings with appropriate and specific direction to the original content.
Join 37 other followers