Love and Lent. They’re like two unlikely but perfectly synchronized dance partners. Lent leads and love follows.
An annual forty day season of fasting and repentance, Lent points us to Easter Sunday on the path straight through Good Friday. And Good Friday is the ultimate illustration of love.

We’ve just celebrated Valentine’s Day, the quintessential annual festival of romantic love. While everybody hopes to live at least a few really great Valentine’s stories, the original story behind the holiday paints a far broader stroke of love than we typically observe. History, mixed with a smattering of legend, tells us about a priest named Valentinius who defied the Roman emperor’s ban on marriages and officiated for young couples. Eventually, he was thrown in prison where he befriended his jailer and then the jailer’s blind daughter whom he tutored and mentored from his cell until he was martyred. The origins of Valentine’s Day point to sacrifice, humility and courage in the face of risk. Valentinius embraced those challenges because he had an example to follow. And it was Jesus.

This is what the Bible tells us about Jesus.
He was despised and rejected—a man of sorrows, acquainted with deepest grief. We turned our backs on him and looked the other way. He was despised, and we did not care. Yet it was our weaknesses he carried; it was our sorrows that weighed him down. And we thought his troubles were a punishment from God, a punishment for his own sins!
But he was pierced for our rebellion, crushed for our sins.
He was beaten so we could be whole. He was whipped so we could be healed.
All of us, like sheep, have strayed away. We have left God’s paths to follow our own. Yet the Lord laid on him the sins of us all.
He was oppressed and treated harshly, yet he never said a word. He was led like a lamb to the slaughter. And as a sheep is silent before the shearers, he did not open his mouth. Unjustly condemned, he was led away. No one cared that he died without descendants, that his life was cut short in midstream.
But he was struck down for the rebellion of my people. He had done no wrong and had never deceived anyone.
But he was buried like a criminal; he was put in a rich man’s grave. (Isaiah 53:3-9) 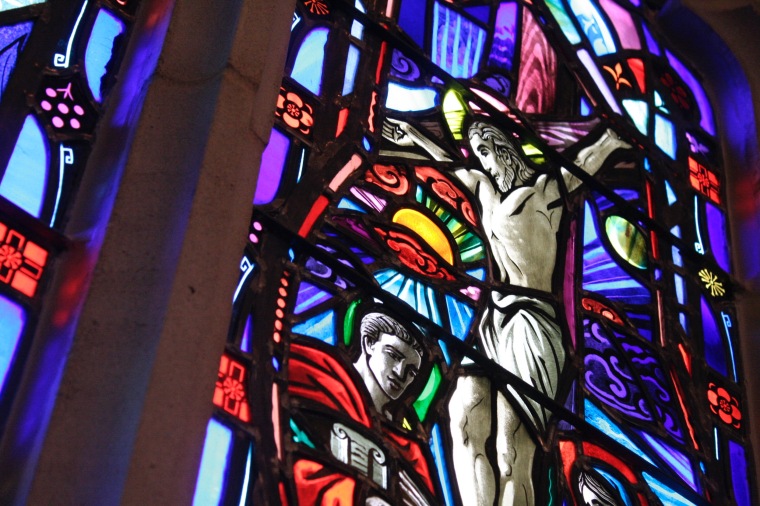 And that is what Lent is all about. Taking the time to pause long and look closely at Jesus. Not sterilizing or photo editing the mental picture but rather, gazing at the cross in all its grisly, appalling horror. And in his pool of blood seeing the words written indelibly, “I Love You”.
The more I examine the cross from that vantage point, the more clearly love comes into focus.
And when the cross is inscribed on my heart, it gives clarity to my identity and we all love forward from our identity.
Jesus says to me, “Love each other just as I have loved you.” (John 13:34 and 15:12)
So, I survey his example and pay it forward to others.
Easier to describe and harder to live because Jesus blueprint for love
-Necessitates sacrifice.
-Entails risk.
-And requires humility.

Love necessitates sacrifice. Last week over coffee, my friend Ruthie described it best. “Love means you’ve got to hang on the cross and carry it too.” Something in my spirit recoils at the thought. The cost feels prohibitive and unreasonable until I consider Jesus who gave up his rights and privileges, deferred the use of his power deliberately and wittingly assumed the burden of sin that he didn’t deserve. He took it all on his tired shoulders and carried it up the hill of Golgotha then nailed himself to the tree. Citizen Way describes it like this:
I used to think that love should never have to bleed.
I used to think that life was all about the dream.
But love is a mess.
And life is a death.
And you can’t escape the cost.
Yea, love is a mess, [that’s] the story of the cross.
I enter His story when I don’t fight for my rights or to be right but rather entrust what is right to my faithful God and let him choose the price.

Love entails risk. We’ve all been burned by relationships. And after some singes and maybe even first or second-degree wounds, we are tempted to self-protect from vulnerability, to resist kindness, generosity and sincere affection. Lent reminds us we’re not just victims. We’re agents too. God took a third degree burn, a mortal wound from me. Lent faces me squarely toward the mirror to see how I have injured and to inspect the harm inflicted by my actions and attitudes. And when I view it, through that lens, Lent provides a correction and gives clarity to my perspective. I accept that love is a messy business and we’re all prone to accidents. And I pick myself back up and step out into the light of the fire because love is worth the hurt.

Love requires humility. It resists self-serving ambitions and ego stroking intentions. Jesus displayed a supreme example of servility in word and deed. There’s an expression that goes, “Leave a place better than you found it.” In relationships, love adapts that cliché and says, “Leave a person better than you found them.” And so I reflect on the long list of people God has caused my life to intersect with and I remind myself to do what I can so that the other person will have trended upward because of their connection with me. And I accept the limitations of my efforts because they make choices too. I focus on giving them a taste of Jesus and pray it will whet their appetite for more. Then I leave the rest up to God.

We’re all hardwired for relationships by design. Everybody longs for love. Everyone wants to be chosen. The good news is that we’ve already been chosen.
Chosen by the One
Who won’t leave,
Won’t change his mind,
Won’t be selfish
Or proud
Or unkind.
The One who will be faithful,
Who will be true,
Who will protect,
And persevere
And be kind.

And so I anticipate, first, the dirge of Good Friday followed by the wild, jubilant Easter morning holy dance of love. And Lent will lead the way.